Since I started taking a statistics class at the local community college, I have had little time for any DIY projects or even little crafty things.  And, without those, I've got nothing to blog about!  But, thankfully, I've got a glogger today (guest blogger=glogger) who is here to share a couple of her most recent DIY projects.  That is, of course, aside from her best (and most involved) project to date of being a wife and mother and homeschooler of 5 young'uns.  Take it away, Amy!

Some of you may know that Emily's birthday is in November.  Some of you may also know that both Emily and I are devoted Young House Love followers.  So this past November, when Emily's birthday and the release date of John and Sherry's book nearly collided, I saw a great gift opportunity!  In the late summer/early fall of 2012, when the book became available for pre-order, I purchased one to be sent directly to Emily, (specially birthday-wrapped with a card, of course!), hoping that it would arrive just before her birthday.  And it did!!  She was delighted, and of course, I was DYING to get my hands on a copy.  She had never gotten me a gift for my most recent birthday (way back in May!), and she had been waiting for "just the right thing"....  I bet you know what I'm going to say next -- yes, she bought the book for me as a 6-month-belated birthday gift.  So after reading through the entire book, (which didn't take too long since I read it at every opportunity!), I mentally broke their ideas into categories:  "must do," "might do," and "hmmmm, that's interesting...." 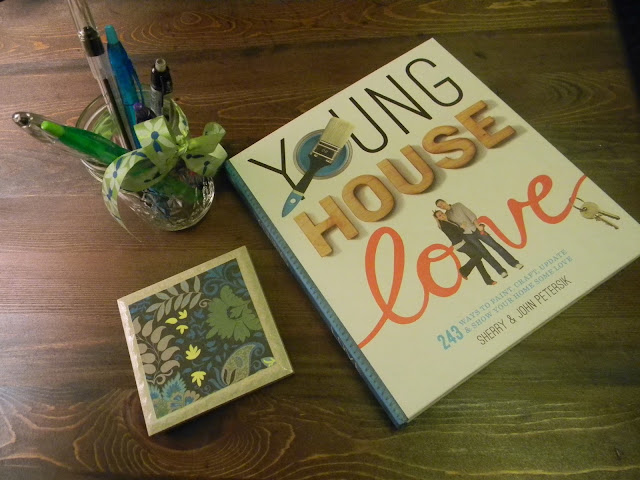 I've been plugging along with the "must do" items here and there, and Emily asked me to share what I've done so far.  So here goes:

We have a frame wall in our upper stairway (by the way, poorly lit stairwell + awful photographer + inexpensive camera = BAAAAD pictures, so I'll only force you to look at one picture of these projects hanging on the stairway wall -- I then attempted to stage them in better-lit areas).  The original idea for our frame wall came from John and Sherry's awesome hallway frame gallery.  When we originally hung all of the frames, we used some things that were just meant to be placeholders until something more permanent was found/made.  So after a year of staring at magazine/catalog pages, I made some custom state art!!  (And for those of you who own the book, it's Idea #124:  Whip Up Custom State Art.) 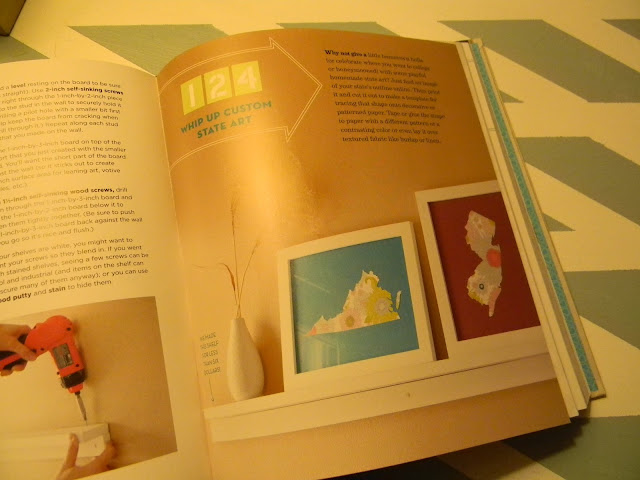 Until we moved to Pennsylvania in 2007, both of us had lived in Maryland all of our lives.  So I decided to do both Maryland and Pennsylvania.  I searched online for maps that were about the size I was looking for -- I was using a 5X7 frame (although you could just print out any size map and enlarge or shrink it to fit -- I didn't do that because our copier wasn't working at the time).  I also read a tip recently about printing maps:  if you just want the outline and not all the stuff inside, google "[your state's name] coloring page" and state outlines should pop up.

So after I printed out the two maps, I used my X-Acto knife to carefully cut out the outline of each state.  (That cursed Chesapeake Bay!)  States with lots of right angles and straight lines = a cinch.  States with lots of little pieces of land jutting out into water = not a cinch.  But remember, it doesn't have to be perfect.  The unfortunate part of this project was that I didn't just have to cut around the outline of each state once -- I had to do it twice!  I used the first cutout as a template and traced around it onto decorative paper, then had to cut around that outline.  Let me just say that this experience brought back some not-so-fond memories of the X-Acto knife project I did in middle school art class.  But once that was all done, I taped it onto a cut-to-size piece of contrasting decorative paper, popped it in the frame, and it was done!  And little by little, one step at a time, my frame gallery is becoming more personalized! 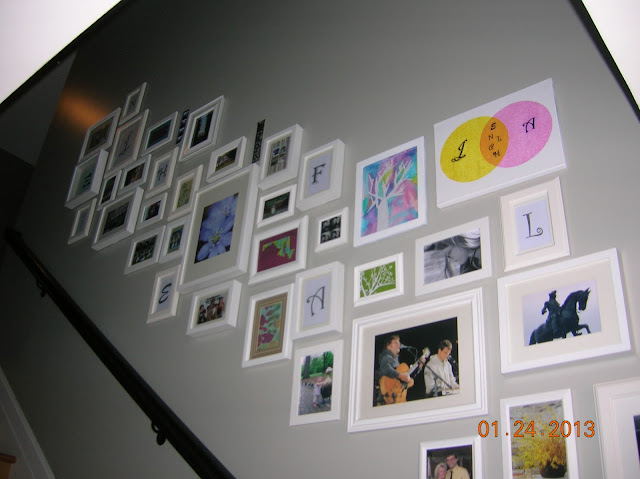 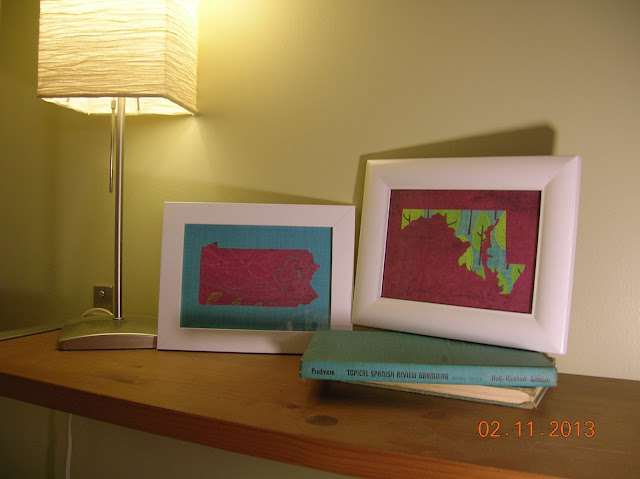 For my next project, (which, thankfully, involved scissors rather than an X-Acto knife!), I decided to try Idea #147:  Make Fun Geometric Art.  (It involved cutting and Mod-Podging tissue paper shapes onto canvas.) 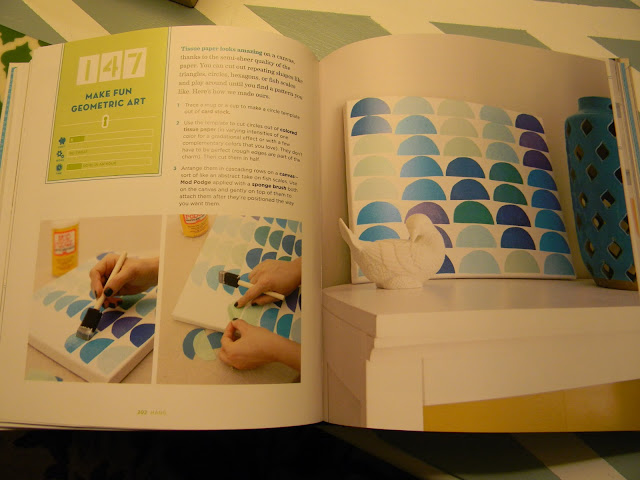 This was one of those projects I started without intending to start anything, so I didn't exactly take inventory and purchase any supplies first.  In fact, it was New Year's Eve, and the kids were in bed and Jim was running a race.  (Yes, he was running into the new year!)  I felt that little spark of creativity, had a couple of hours of quiet, and figured I should seize the opportunity to get something done!  So I gathered tissue paper, scissors, a pencil, round objects, Mod Podge, a sponge brush and canvas, and I set to work.  I love the combination of blues and greens Sherry chose for her piece, but since my tissue paper selection was a little bit sparse, I settled for yellow, and went back and forth on the shapes/placement and whether to use other colors.  I eventualy added some black construction paper to the mix.  I don't absolutely love the final result, but it's not completely awful for a first attempt.  Who knows -- I may buy a bigger canvas, more tissue paper, and have another go at it... 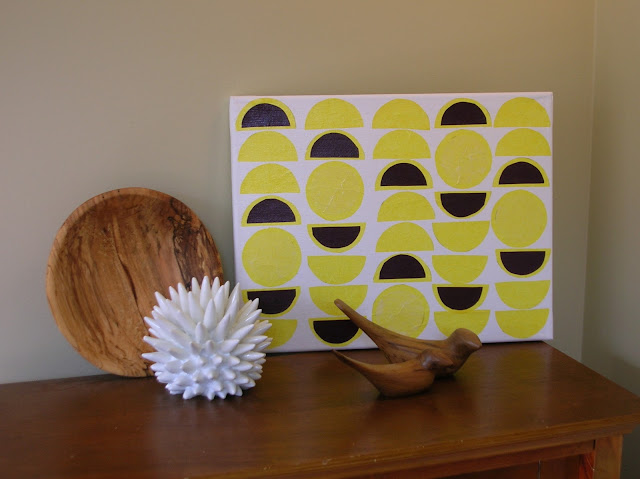 The next thing I decided to tackle was actually inspired by something I saw on Amanda Bowe's (of Our Humble Abode) Etsy shop.  Check out her custom Venn Diagrams -- cute idea, huh?  (She's even got one on her own mantel with her and her husband's initials.)  I figured I'd throw in a twist, though:  I decided to combine the mod-podged-tissue-paper-shapes-on-canvas idea (Young House Love) with the husband/wife-initial-venn-diagram idea (Our Humble Abode) and ended up with a mod-podged-tissue-paper-family-venn-diagram-on-canvas (Our Young Humble House?  Hmmmm, not too catchy...)  Anyway, after playing around with different colors of tissue paper circles, I settled for pink and yellow since the other color combinations didn't blend well in the overlapping part.  I printed out the first initial of each person in our family (seven, all together) on plain white paper, in the same font each person had chosen last year when I printed our initials as part of our frame wall.  (That was a fun and simple project -- my kids loved picking a font for their letter!  And I got to pick out Jim's font -- I chose pirate writing since he's the captain of our crew!)  For this project, I printed mine and Jim's in a larger font than the kids'.  After I cut around each letter semi-carefully, (they show through a little, so if I did it again, I'd be more careful), I figured the correct placment of each of the initials and the tissue paper circles.  I mod-podged each of the letters to the canvas first, then mod-podged the tissue paper over that, then put a coat of mod-podge over the entire thing.  The letters were still not as clear as I wanted so I ended up going over them with a black Sharpie after everything was dry.  Overall, I'm really pleased with the result.  Just seeing how it represents our very own family makes me smile each time I go up or down the stairs!  (Although if we have any more kids, I'll have to make another one since the five kids' initials take up most of the overlapping space!) 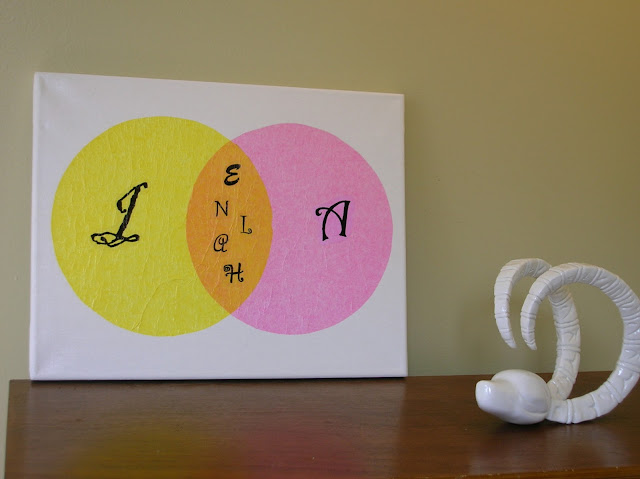 So that's about it for now.  I'm currently working on another project from the book, though:  #230, Paint a Gradient. 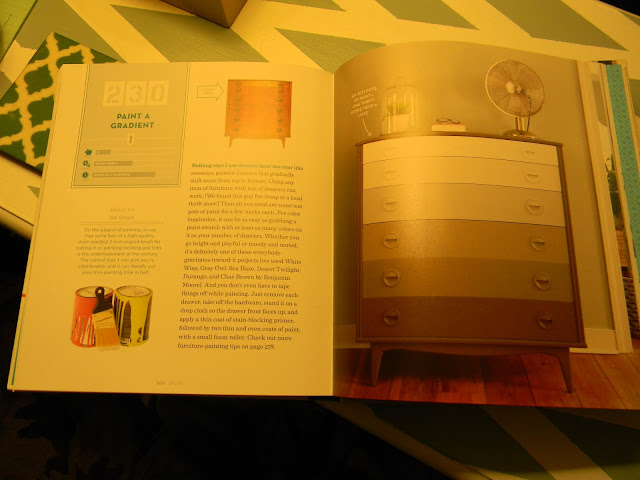 My daughter helped me to break out of my comfort zone and go with some fun colors for an old dresser that Jim brought into our marriage.  I'm liking what I see so far.  Hopefully I'll be back with details.
Thanks, Emily, for allowing me to glog!  All afternoon and evening the kids kept walking by me at the computer saying, "You're STILL writing?!", so I know that full-time blogging isn't for me!  But I appreciate being able to share a few projects here and there!
Um, how awesome are all of Amy's projects?!  How in the world does she find time to do these crafty things- that's what I want to know!  You know what I love so much about my sister and the way she dresses her home?  She takes time to personalize the beautiful things around her.  I feel like anyone can have beautiful things, but Amy has beautiful things in her home that have meaning behind them.  And, that is so special in my opinion.  Stay tuned- maybe she'll share with us that ombre dresser she's working on!
xo,

Emily
Posted by Emily @ The Diligent One at 8:55 PM