Bring on the rain

...'cause our rain barrel is up and ready! 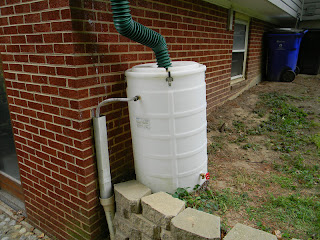 We have had 4 of these 55 gallon plastic drums in the greenhouse since we moved into this house.  The previous owner had them filled with dyed water and used them to provide ambient heat for the houseplants and veggies they grew out there.  But, since I've never really used the greenhouse for growing plants- especially not in the winter when the drums of water would be most helpful- the 4 large drums just seemed kinda in the way.

So, several weeks ago, I freecycled 3 of them, and kept one with the idea that we might fabricate it into a rain barrel.  Well, this weekend Colin and I had time to tackle the project.  We headed to Home Depot with a general idea of what we needed, a large dose of cautious optimism (me), and loads of confidence that we could accomplish the job (him).

We picked up 4 items that we needed for this project:  a faucet, a hose bib, a spade bit for the drill, and some flexible downspout tubing. 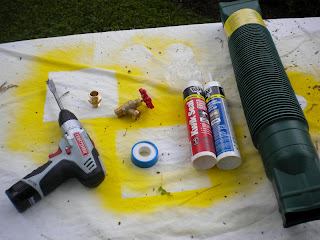 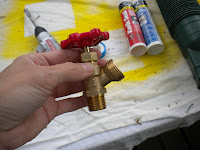 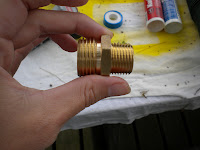 There were a few other things we used that we already had:  a dremel with sanding bit and caulk. 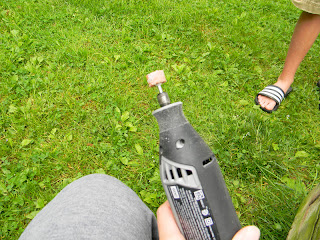 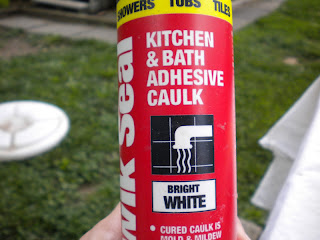 The first thing we did was drill a hole for the faucet at the bottom of the barrel.  We put this hole very close to the bottom of the barrel, because our barrel will sit on a stand 12-18" off the ground.  But, if your barrel will sit on the ground, make sure to allow room to fill a watering can when you decide where to install your faucet.  Colin drilled a hole with the 7/8" spade bit and then used his dremel with sanding tool attachment to make the hole juuuust large enough for the 1" faucet to screw into. 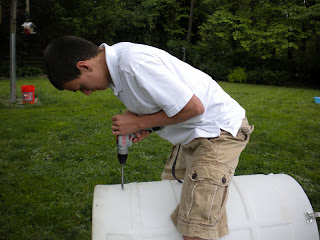 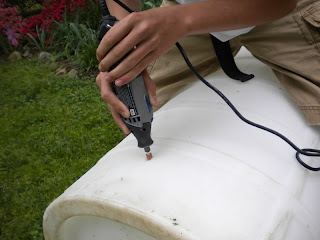 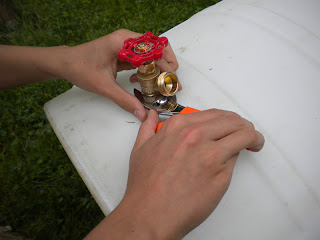 Once he got that screwed in, I caulked the inside and outside. 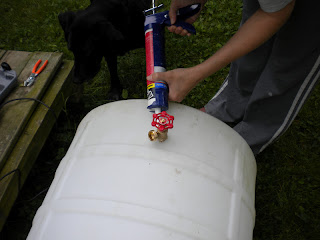 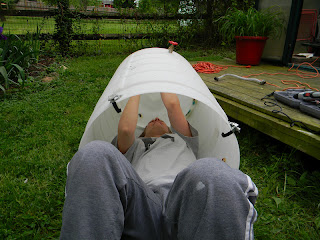 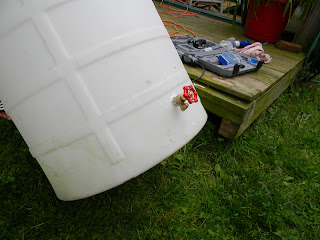 Next, Colin drilled the same size hole for the overflow valve, which is near the top of the barrel and installed the simple hose bib there. 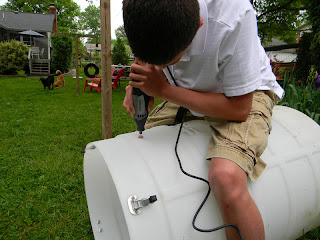 Then, we started the process of figuring out how to cut a hole in the lid so the rainwater could drain into the barrel from the downspout.  This took a bit of creativity, which happens to be Colin's specialty.  First, I used the downspout tubing to trace a circle onto the top of the lid. 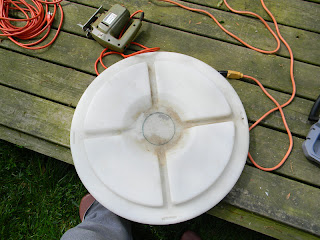 Then, I attempted to cut out the circle using the jig saw (after Colin drilled several pilot holes with the spade bit again to get me started).  It was at this point that we discovered that the lid is actually several inches thick and hollow, so there were 2 layers of plastic to cut through, and the jig saw was having a fit if I tried to cut through both at the same time.  So, we tried plan B:  a dry wall saw.  Which didn't work.  Plan B was quickly followed by Plan C:  a tiny hand saw (also didn't work), and then Plan D: a box cutter (total fail).  We ended up settling on Plan E, which was that Colin drilled a series of holes using the spade bit again (spade bit for the win, anyone?) all the way around the hole I had traced.  He did this for the top layer of the lid and again for the bottom layer.  Then, I was able to even things out with the jig saw just fine. 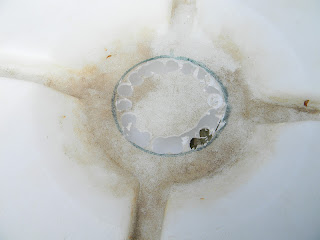 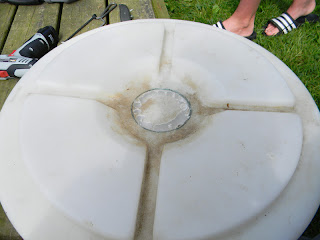 The final step to the process was to retrofit the existing gutter system. 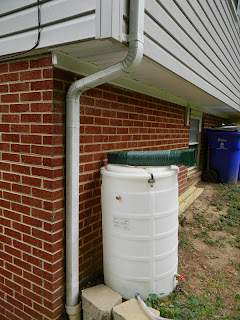 A few sections were removed, and we had redirected the downspout in no time. 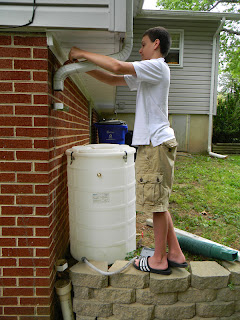 Lastly, we used this old scrap piece of garden hose we had lying around to route the overflow valve at the top of the barrel into the pipe that the downspout previously was routed to. 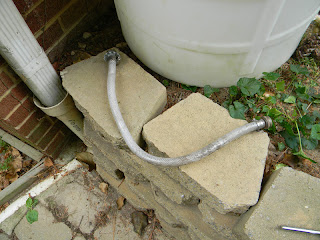 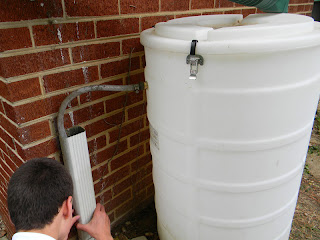 And, there you go:  a homemade rain barrel! 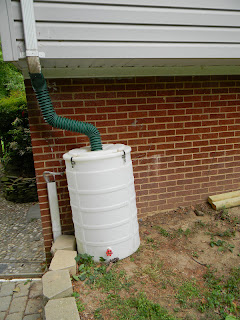 Of course, we do still need to build the stand that the barrel will sit on, but I think dear old Dad will need to be in town for that.  And, if we get lots of rain between now and then, I'll just have to drain the barrel when the time comes.  All in all, I think it took us about an hour and a half to turn our barrel into a rain barrel, and that was with lots of trial and error!  I think we could do another one in half that time.  And, here's a cost breakdown:

I wanted to do this for under 20 bucks, so we did go over budget.  But, I am willing to overlook the cost of the spade bit and chalk that up to building up the 'ole tool box.  :)

Here are a couple shots I took from the backyard to show how the rain barrel looks up against the house and to show the placement (on the left corner of the house). 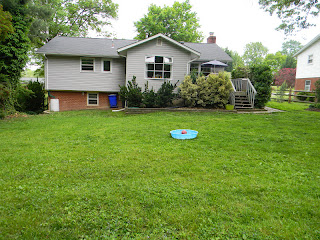 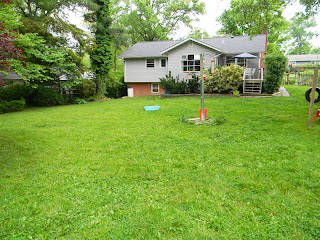 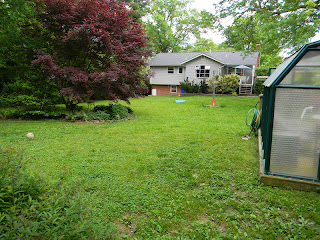 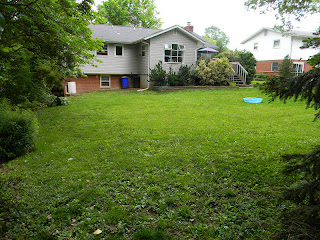 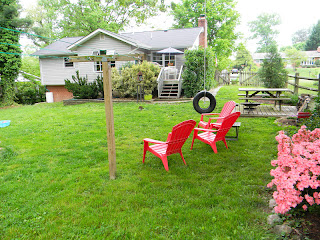 ** linking to the girls at