Over the past several weeks, our Christmas decorations have spread from the living room to the rest of the house.  Last weekend, we had an open house at church.  I had made several buntings for one of the kids' activities, and a couple of them made their way back to my home.  One on the mantle- 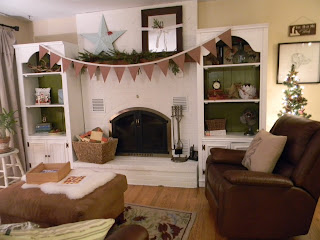 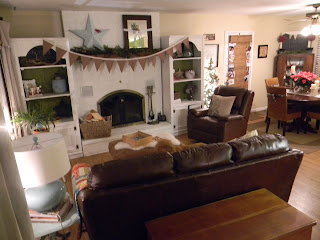 And, one to this- perhaps my favorite vignette of the whole house! 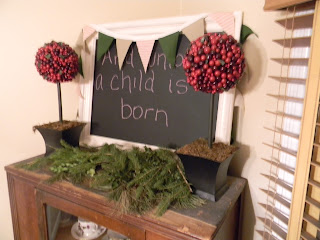 This little tree found a very special place in the living room where it can be seen both from the living and dining rooms, and even from the kitchen.  I've had this little artificial tree for years, but it almost found itself in the trash several years back.  It was previously pre-lit, but when the lights partially burned out, I was ready to trash it.  Until Colin pointed out that we could just add lights to it.  So, we did!  Once we strung the new lights and decorated it, you could hardly notice the non-burning lights.  Well, this year, Colin suggested that we remove the dead lights.  Um, have you ever tried to de-light a pre-lit tree? Let's just say those lights are not meant to ever come off!  It took several hours to remove the lights from our little tree, but Colin was right- it's much better. 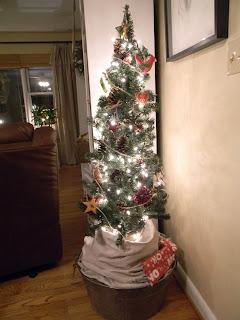 I kept things really simple with this tree.  It sits in an urn that I've always found a bit formal, so I plopped it into an old beverage tub and covered it with some burlap and a drop cloth remnant.  The decorations are  very natural- pine cones, several ornaments, and my favorite of all- twine for garland. 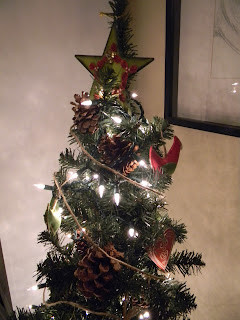 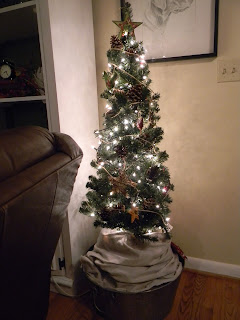 As I was snapping these pictures, Piper hopped onto the couch and began looking so incredibly adorable. 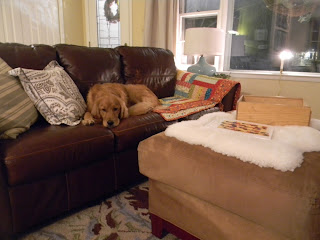 I could not stop myself from taking a couple pictures of her.  I mean, can you blame me?! 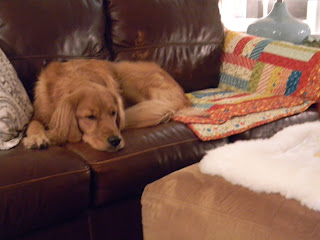 Emily
Posted by Emily @ The Diligent One at 8:00 AM