Ya'll, do I have an exciting post for you today!  I was so over the moon excited about a project that my sister, Amy, completed recently that I asked her if I could blog about it.  Not only did she say yes, she sent me pictures AND text!!  So, without further ado...

When my sister asked me if she could blog about my latest project, I was excited, but a little hesitant.  What if I couldn't come up with text that was as clever as those I've read in other blogs?  What if the pictures I took made my completed project (or my house in general!) look bad?  But after a few minutes of considering, I decided to go for it!  So here it is.  And keep in mind, I do not have an expensive camera, nor am I a very good photographer -- but thankfully I do have a cute daughter!

I am a wife, homeschooling mother of five, cook, maid, chauffer, (the list goes on...), so I have very little time for any "extra" projects taking time out of my day.  When my husband, Jim, and I lived in each of our first two houses, (before kids, and then as our family was growing), we did a good bit of work, both inside and outside.  Even when we bought this house five years ago, we did some work here and there, but we've had a lull for a while.  After Emily began her blog in the fall, though, I started becoming reinterested (if that's a word) in getting projects done around the house.  And I don't mean fixing broken stuff or replacing leaky faucets or anything like that -- I'm talking fun stuff, like painting and hanging things on the walls.

Several months ago Emily directed me to Young House Love, a blog which I now follow daily -- somehow I've managed to squeeze that into my already full day!  So recently, when Sherry of YHL had a post called "Hi, Chair," in which she painted an old wooden high chair a bright, cheery yellow, I was forced into action.  You see, I've had an old high chair sitting in my basement for several years.  My father-in-law used it as a baby, and it was given to my husband and me when our daughter Eden was born, over 11 years ago. 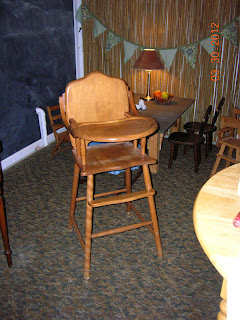 Fast forward four kids later, and we have another wooden high chair that the current baby (20-month-old Hope) uses, and alas, the old one sat unused in the basement.  Until recently, that is.

The high chair originally had a tray that raised and lowered, but it had broken into two pieces and been screwed back together (quite some time ago, it appeared).  So my first step was to remove the tray and the wooden pieces that attached the tray to the chair itself. 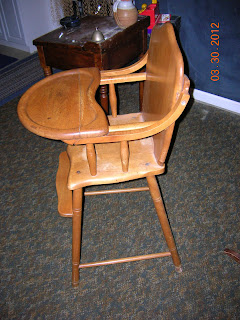 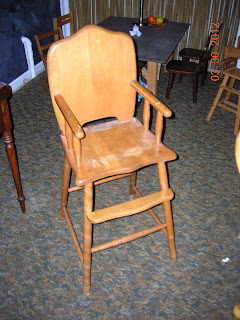 After a good wipedown (yes, I'm afraid there was some 4-year-old food still stuck on there -- yuck!), I gave it a quick coat of primer. 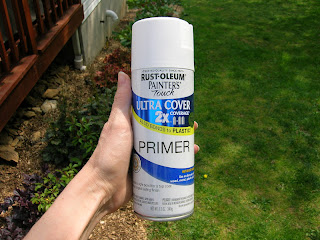 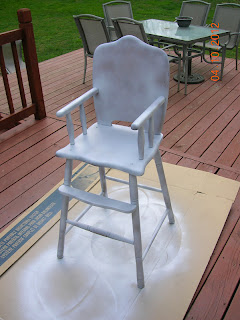 I took my 7-year-old daughter Leah with me to Home Depot to pick a paint color, and she chose Warm Yellow.  But after using the entire can (4-5 coats), the chair still had spots I wasn't happy with.  Since the closest Home Depot is a 30-minute drive, I went to the local hardware store to get a second can.  Unfortunately, or luckily, as it turns out, they didn't have Warm Yellow, but they did have Sun Yellow.  After seeing and loving Sherry's choice of color, I decided to go ahead and get the Sun Yellow. (Thankfully, I don't think Leah has realized that I changed colors on her!)  So after another 4-5 coats of paint the chair is done! 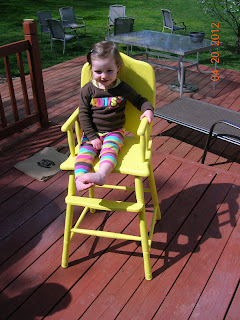 I learned a few things in the process, too.  First of all, don't spray paint on the deck.  No matter how large the piece of cardboard underneath the object you're painting is, it's not big enough!  My deck now has several different colors of spray-paint-haze on it.  Second, it can be windy even if nothing outside is moving and everything appears completely still.  I don't know how many times I went out there and got set up, only to realize it was too windy to paint!  Third, I probably should've sanded some places lightly between coats.  I wanted a perfectly smooth, glossy feel, and while it does feel that way in some places, it's a little rough in others.  Oh, well -- Hope doesn't seem to mind.  In fact, as you can see, Hope loves it! 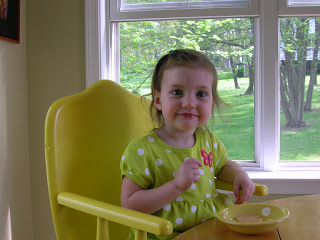 She actually sat in it for the first time today to eat a snack, and it scoots up to the table really well and keeps her nice and high. 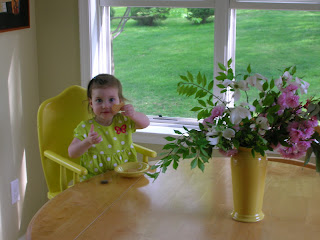 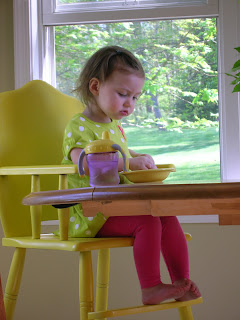 It's so cute and bright that I think it's going to live in the corner of the breakfast room; I'll just scoot it up to the table at mealtimes! 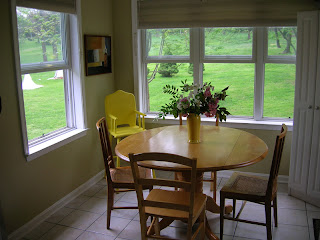 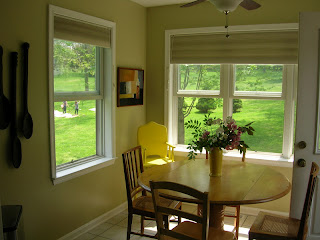 And yes, I do feel like a little bit of a copycat, but that's okay with me!


Squeeeee!  Okay, okay. Since we're all self professed YHL groupies here, let's play the What's Your Favorite Part Game, YHL style.  I love the color choice.  How cheerful and friendly!  I also love that Amy gave new life to a chair used by her children's grandfather!  And with it's new look I am sure it will be used and loved for many more years.

Many thanks to Amy for allowing me to share her project (and for sending me pictures AND text)!  Amy had High Hopes for this high chair, and I think she most definitely realized them!

** linking to the girls at