Sarah from The Ugly Duckling House was talking today about outdoor deck tiles, and reading her post made me realize that I never blogged about MY outdoor deck tiles from Ikea!  Probably because the project was completed pre-blog. 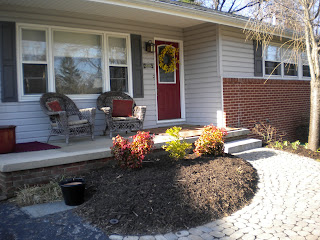 Pretty basic concrete slab leading to the front door.  And, here's the after: 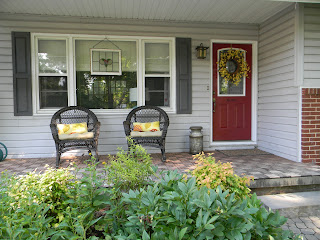 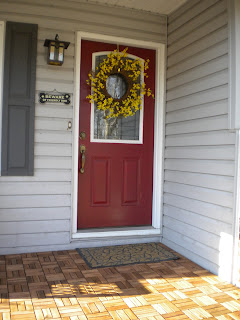 Here's a closeup of the tiles.  Each tile is actually made up of 4 smaller squares.  Aren't they lovely?! 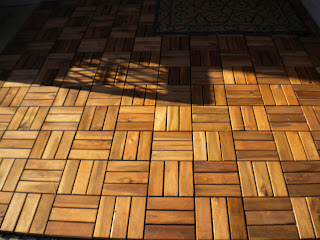 And, since they are interlocking (and floating), the installation is a cinch.  We had the front porch covered except for the part around the edges that needed to be cut in an hour or two. 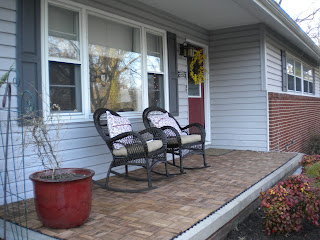 When it was all said and done, we ended up putting the cut edges next to the house, but that was just a matter of sliding the entire layer of connected tiles out from the house several inches and squeezing in a cut tile.  As you can see from this picture, I decided not to do anything on the front face of the slab.  I had thought about adding something to cover the concrete completely, but I worried about drainage and really just never came up with a good plan. 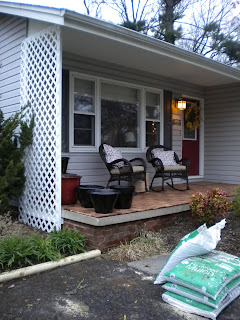 The one thing we did do, though, was tack down the tiles where the step is from the walkway to the front porch.  I found that it was too easy to stub your toe on it as you stepped up onto the porch.  But, those screws can easily be removed if I ever decide to replace the decking.  But, I can't imagine why on earth I'd do that! 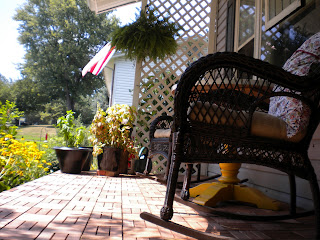 And, frankly, since the front garden has taken off, the front face of the concrete slab is hardly an eyesore. 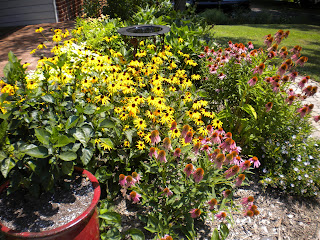 Now that I have shown you what a difference these guys made on my front porch, I will say that if you plan to use them, do yourself a favor and seal them.  I did not seal mine prior to putting them down, and after 2 summers they are looking kind of rough already.  I get a lot of direct sun for most of the day (hence the lovely perennials), which really has wreaked havoc on the tiles.  I think I discovered after installation that they are stained but not sealed (!??!?!), so I really should take care of them soon.  But, well, that's just another project for the list.  :)

Hope that helps, Sarah, if you decide to give outdoor deck tiles a shot!