Remember back in April, when I declared the kitchen project 90% done?  Well, apparently 90% was good enough, because that's where progress stalled the rest of the spring and much of the summer.  But eventually, "good enough" became super-annoying-weight-on-my-shoulders-when-will-this-kitchen-ever-be-done.  And, that's when I got serious about finishing that last 10%.

Let me see if I can bring you up to speed on what has changed since then.  Almost immediately once I painted the bead board backsplash in the grey-beige color I had used on the top half of the breakfast room, I knew it wouldn't stay.  It was kind of Country Meets Country.  When I was really going for Country Meets Modern. 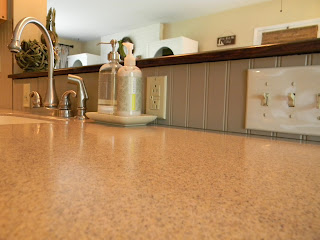 Plus, because of the U shape of the kitchen and because of its location smack in the middle of the house, it still doesn't get as much natural light as I wish- even after we removed the top half of the wall.  So, at times it's kinda dark.  And, once I added the dark-ish paint on the backsplash, it was just too dark.  But, I lived with it for a while to make sure it didn't grow on me.  Sadly, it didn't.  So, even though I was smart enough to paint the backsplash before installing it, I still found myself painting it again once it was installed.  Huge bummer.  4 coats of semi-gloss white later, and I'm much happier. 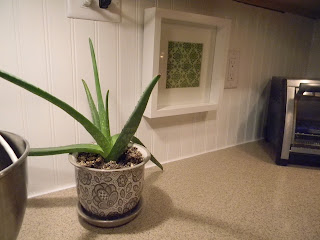 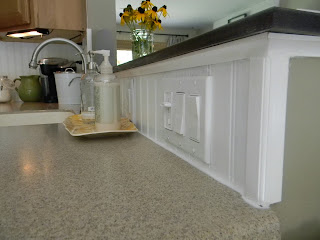 As if painting and re-painting the backsplash wasn't bad enough, I quickly remembered one of the reasons I didn't go with a shiny, clean white for the backsplash in the first place:  the light switches and outlets.  They were bone.  Personally, I'm a bright white kinda girl.  I love me some fresh, white molding, and I definitely prefer white outlets and switches.  And, while I was willing to live with the bone outlets paired with the greige backsplash, they would never work with a white background.  So, along with repainting the backsplash, I had to also swap all of the switches and outlets.  How many could one small kitchen have?  Our teensy, tiny kitchen has 4 light switches and 7 outlets!  Swapping these out wasn't necessarily hard- just time consuming and a task that required extreme body contortions since the jutting out upper and lower cabinets prevented me from getting the angles I needed for the job to be simpler.  But, after a week of tackling a switch or a plug or two per evening, and I had them all swapped out.  And, looking fine if I do say so. 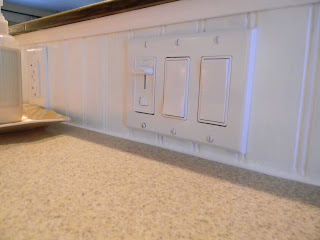 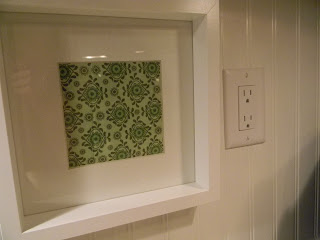 Well, all except this sucker. 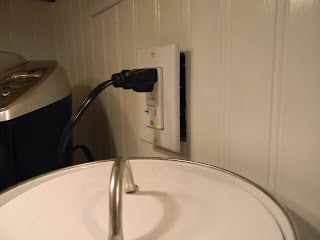 This guy has been a major thorn in my side.  He is a GFI, and he (along with the 83203343496756 wires hooked to him) refuse, and I mean REFUSE, to fit back into the box.  I will eventually be having another session during which I hope to convince him to get back in there, but in the meantime, we just focus on not electrocuting ourselves.  :)

I think part of what caused this project to drag on was the amount of finishing work there was.  I'm more of a big picture DIYer.  That's why I love painting and hanging things on the walls:  the gratification is almost immediate.  I found the painting and caulking and nail hole filling and sanding and re-painting, etc, etc that the beadboard backsplash required to be almost torturous.  I found so much gratification in the actual installation of the beadboard, but then I felt the finishing work was just a drag, frankly.  I knew it needed to be done for the project to be complete, but I really found no pleasure in it.

That being said, I have to say I am super proud of the molding I decided to install below the half wall.  I hope to some day have something much more interesting topping the half wall:  some old hunk of a barn beam would be awesome.  But, for the meantime, I decided to make it look as good as possible with a piece of stock wood that we cut down and stained.   In order for it to look finished off, I decided to add some cove molding around the underside.  I managed to get it done using a cheap-o miter box and saw from the home improvement store.  And, while I will admit that mitering a 90 degree angle was more challenging than I would have liked, we got 'er done, and I think it looks super finished.  It's a detail that I am glad I did not overlook. 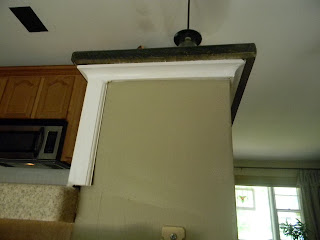 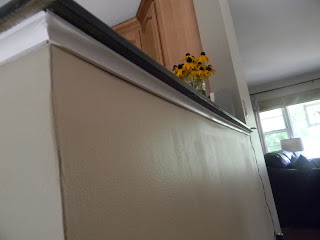 So, let's see:  what else is on the kitchen to do list? 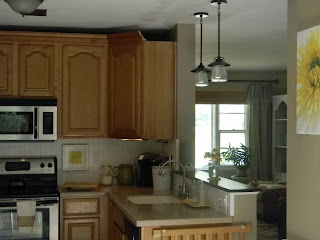 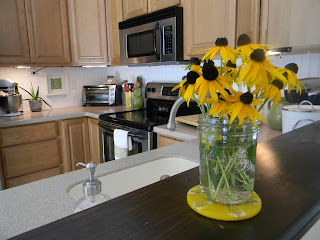 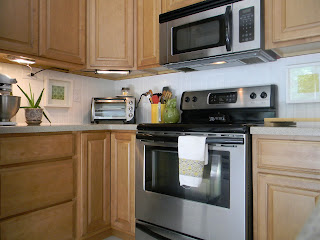 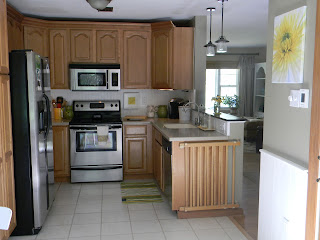 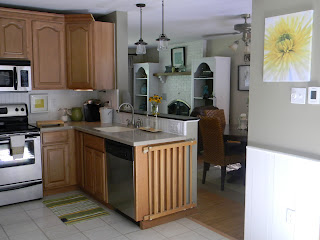 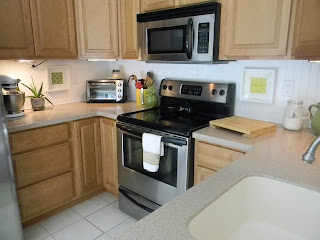 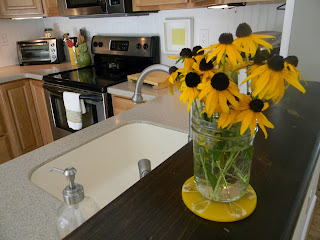 Emily
Posted by Emily @ The Diligent One at 4:20 PM