You know those projects that perennially stay on the back burner?  You want to accomplish them, but they're invisible, or they don't nag on you like some other projects.  Or, maybe they do nag on you, but they're just easy to ignore.  Or, maybe they're hidden above a drop ceiling in your basement.  (Or, am I the only one with secrets hidden in the drop ceiling of the basement?)

Colin and I embarked on one of those projects today quite by accident.  You know the scene:  one minute you're tightening what you believe to be the *one* connection on the cable line to the modem, and the next minute you've ripped apart the entire basement drop ceiling following wires zigzagging across the house.

Okay, ya'll.  I'm about to show you something that you absolutely will not believe.  Colin and I removed all of these wires from all over the basement- none of which were hooked to absolutely ANYthing. 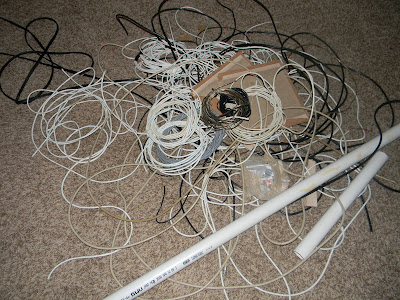 I know, I know.  I hope you were sitting down when you saw that.  How on God's green earth?!  That's what I want to know.  There were coax, speaker, component, and telephone wire going in every direction across the basement, and many ended in a live end plugged to nothing or they were just cut!  The more ceiling tiles we moved, the more wires we found.  Seriously, it was like a wire graveyard down there. 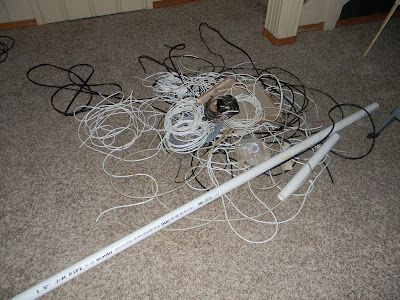 Colin says we can take these wires somewhere and get moolah for them.  Is that true?
xo,